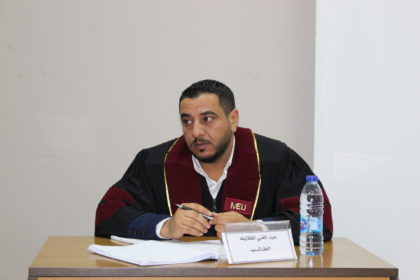 AMMAN – Researcher and Faculty of Arts and Sciences student Abdulghani Taysir Al Khalayleh defended his thesis “The Role of Political Parties in the Formation of the Parliamentary Government”.

Al Khalayleh adopted a descriptive-analytical and historical methodology to define the role that political parties play in Jordan’s political system and discuss the constitutional articles that grant political parties the right to form parliamentary governments.

Al Khalayleh found that political parties in Jordan have faced many challenges since the day of Jordan gaining its independence up until the present day. He addressed how his findings showed that the limited participation of political parties in governmental operations, along with their lack of well-defined political agendas to guide their operations, has limited their effect on the state of the Jordanian economy and society. He also drew a correlation between the shortcomings of modern Jordanian political parties to their members’ pursuit of personal interests, and claimed that this ultimately harms the formation of Jordanian parliamentary governments.

The research results illustrate how important it is to increase the Jordanian populace’s awareness of how important it is to form parliamentary governments and refer to his Majesty’s discussion papers in all operations. Al Khalayleh concluded by urging all concerned parties to establish a comprehensive national dialogue, promote the role of political institutions, and educate Jordanian society on its rights and duties as stated in the Constitution. Al Khalayleh’s findings left him with the opinion that it is possible to turn political parties into the basis upon which parliamentary governments are formed.

The thesis assessment committee presiding over this project was made up of Dr. Sahar Mohammad Al Tarawneh, Al Khalayleh’s supervisor, Dr. Rima Lutfi Abu Hmeidan, the MEU internal evaluator, and Prof. Ameen Awwad Al Mashaghbeh from the University of Jordan.